“The the midst of Scotland’s punk explosion, a Glasgow maths teacher hung up his mortar board and picked up a camera. His name was Harry Papadopoulos and his photos would come to define and inform Scottish popular culture in the 1980s”

(Excerpt from: What Presence! The Rock Photography of Harry Papadopoulos)

To promote this collection of iconic photographs taken by Harry Papadopoulos were Clare Grogan (Altered Images) and Ken McCluskey (The Bluebells), with lensman Harry sitting in the front row.

There’s a stunning image of Clare standing in the rain holding an umbrella. She’s looking moody with a petulant ‘don’t mess with me’ stare. It’s 1981. She’s a tender but determined-looking young girl on the cusp of stardom. Clare sets the record straight. Harry, always on the lookout for a good photo opportunity suggested Clare get outside and stand in the rain. She had just arrived at Harry’s London flat, she was tired, fed-up and it was the last thing she wanted to do, but Harry was always able to persuade his subjects to do things they wouldn’t usually.

“His charm and easy wit put everyone at ease; conversation would flow and one would forget that one was involved in a photo session.”

As well as photos of the big stars such as Patti Smith, Debbie Harry and Iggy Pop, most of the images in this book capture an exciting time in Glasgow and Scotland, running through 1978 – 1984. After starting a career as a teacher, Harry’s love for photography took over. It lead him to leave Glasgow for London to become a staff photographer for Sounds music weekly. His flat in Willesden became a stopover for many Scottish musicians visiting the big smoke. A lot of the photos featured were taken in and around what became affectionately nicknamed The House of Camp, or as Clare described it, this “Terry and June type of house”.

Meanwhile, the burgeoning music scene in Scotland was tempting the A&R men out of London and they were always to be found in Glasgow searching the city for “the next big thing.”

A lot of it was down to Edwyn Collins and Orange Juice, as well as Alan Horne’s Postcard Records, located at the now legendary address of 185 West Princes Street, Glasgow. Clare admits they were a catalyst. They made other bands and musicians feel that everything was possible. Their presence around town was well known, and not only in a musical sense, they also stood out for their natty way of dressing, which came courtesy of local charity shops.

Harry spent a lot of time with Orange Juice and his photos show how relaxed Edwyn and the band were with him. 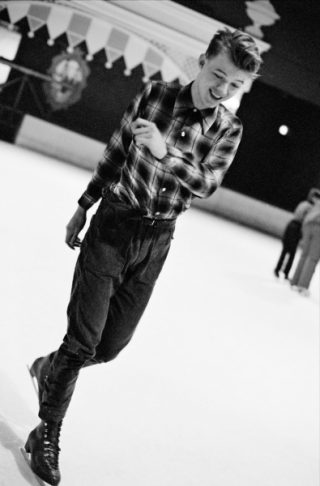 “That to me is a very typical Harry picture, in the unobtrusive style he had. He was in and out. He really hated faffing. I never saw him set up lights. He was never pretentious. But he lived in his dark room.”

As well as persuading his subjects to do things they wouldn’t normally, he had that camera man’s skill of invisibility. People weren’t aware he was taking photographs.

Nicknamed the guerilla lensman, he would take random shots here, there and everywhere.

Today it seems to be a dying brand of photography. Bands and musicians are more heavily controlled, photos are more staged and photographers aren’t granted the same access. Images are carefully airbrushed and pop stars are perfect. “They don’t have plooks these days” joked Clare, who also adds that Harry would just photograph you as you were.

Harry’s photos record an important and ground-breaking era of musical history. They were destined to become lost and forgotten, had it not been for Ken McCluskey of The Bluebells.

Ken visited Harry, who had returned to Glasgow in 2006. That visit made him realise that Harry had years-worth of contacts, negatives and photos in need of urgent care and attention. Harry, whose health had declined following a brain aneurysm in 2002, had no plans to do anything with his photos.

The mammoth task took over two years and started with Ken preserving, cataloguing and scanning all the photos. He then enlisted the help of Street Level Photoworks in Glasgow, who eventually held a successful exhibition in their gallery from December 2011 to February 2012. 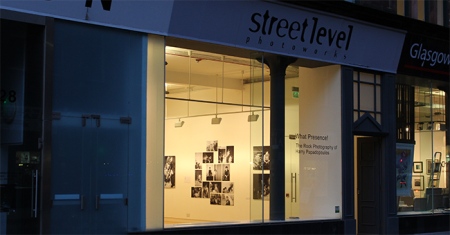 During the process Ken had no idea what would turn up and he was often stopped in his tracks by his discoveries.

One of those images again features a young Clare Grogan, who spookily appears like a ghost watching herself on stage with Altered Images. Harry admits this was a double exposure taken by accident, but the effect is stunning.

Not only persuasive with musicians, car salesmen also succumbed to Harry’s charms. The garage showroom The Bluebells were photographed in, way back in 1980, is still trading on Glasgow’s Woodlands Road.

What is striking about a lot of the images is the playful but youthful naivety that Harry has captured perfectly. Ken and Clare testify that it’s a quality that was most definitely there.

Feeling like they were the most unlikely pop stars, Clare spent most of her time in awe of the people around her, but even so, Altered Images were in the right place, music was their passion and they were “nuts about it”. Even today Clare says she feels lucky to have shared the same space as a lot of her idols like Siouxsie Sioux and Nick Cave.

“He (Harry) made me feel like I belonged just a little bit more to the place I found myself.”

Ken identified The Bluebells’ naivety as their strength, because in not recognizing the enormity of what they were doing, they just went along with the flow.

They also didn’t realise how important Harry had became. He was moving in big circles, taking photos of stars like David Bowie and Nick Cave. The Bluebells took a lot of it for granted, but not in a complacent sense, they just didn’t realize the importance of what was emerging, the history that was being written, recorded and photographed.

“ … here we have a collection of photographs that succeed time and time again in getting to the heart of the subjects and giving us a glimpse of the youthful dreamers behind all the noise.”

The foreward to the book is written by Peter Capaldi, famous for The Thick Of It, but not so famous for his time in pop band The Dreamboys, which also featured US television host Craig Ferguson on drums. Harry captures the band’s moment complete with Peter’s Frank Spencer style v-neck tank top.

“I would love to have been a pop star – anyone who says otherwise is a liar.”

There’s also a thoughtful and well-written introduction to the book by Ken McCluskey. The affection he has for Harry is obvious and the book feels as much a well deserved gift and memoir to Harry as it is a stunning collection to be owned by the  music/photography/book loving public.

Ken McCluskey was perfectly placed to co-curate this collection. He should be very proud of his efforts and hard work.

“Harry put bands at ease with his laidback attitude. He seemed wiser – like a quieter, thoughtful older brother.”

Clare Grogan and Ken McCluskey at Aye Write! at the Mitchell Library in Glasgow
Picture from The Herald

“Harry’s plans for our early Glasgow photo sessions generally began with him saying, “Let’s all go for an adventure and see what happens.””

The What Presence! exhibition has been touring, currently at McManus Art Gallery & Museum, Dundee until August 11, 2013

What Presense! The Rock Photography of Harry Papadopoulos

Feature from The Herald dated December 16, 2011